Danny Grieves of GS Metro was quickest by 29 seconds as he took a win over ten miles in an event organised by Cramlington CC on Saturday.

Held at Cramlington in Northumbria, the time trial attracted a field of 67 riders. But it was Grieves who came out on top, clocking a time of 19.28 to take the win.

He has recently come second in two North Tyneside Riders events, over 10 and 27 miles and won the Ryton Tri and the Blaydon CC Christmas Charity event at the end of last year.

And although he didn’t get near his own personal best over the distance – a 19.03 – he was still too good for the rest of the field on the day.

Colin Humphrey of Derwentside CC was second in 19.57, just six seconds off his personal best. Liam Beaty of Hawick CC was third in 20.34. Finishing eighth overall, Nev Martin of GS Metro took the veteran prize with a time of 21.26.

Alice Earle of the University of Bristol CC was top woman in a time of 25.07 with Hannah Baker of North Tyneside Riders CC second in 27.36. Cassandra Greaves of Cramlington CC was third woman in 28.46. 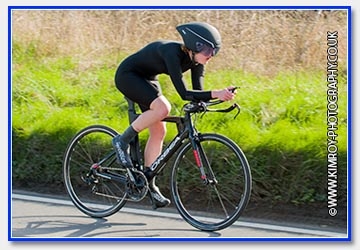