Aaron Ward top of the pile in Etwall 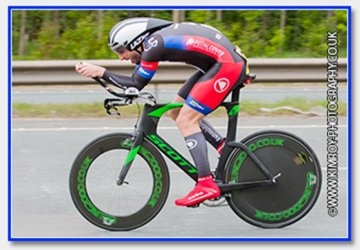 Aaron Ward was the winner of the men’s event at the Burton & District CA 10 on Saturday in a high-quality race.

The course largely run on the A50 and finishing in Etwall, Derbyshire, brought out the best in the riders, the top five all going under the twenty-minute mark.

Ward (Team Bottrill/HSS Hire) was the clear winner though, his time of 19 minutes 27 seconds gave him a 28 second winning margin.

The 29-year-old from Rugeley, Staffordshire had a third place at the VTTA in April, but his time on Saturday was two minutes quicker.

Ward was joined on the podium by teammate Daniel Barnett, who along with fellow veteran Ian Guilor (Mapperley CC) could not be separated.

Both riders clocked 19.55 and had to settle for a share of second place as well as the fastest veteran.

John Lucock and Lee Tunnicliffe were the other riders to go sub-20-minutes, but just missed out on the top three by one and two seconds respectively.

Team Bottrill/HSS Hire were also the quickest team, Ward and Barnett joined in the top ten by Neal Parkin to take the team prize.