Records fall again on the V718

Both the men’s and women’s national 10-mile competition records were broken, as Marcin Bialoblocki (One Pro Cycling) clocked 16.35 and Anna Turvey (Tyneside Vagabonds CC) clocked 19.08 in the SSLL Racing Team 10-mile event on the popular V718 course in East Yorkshire. 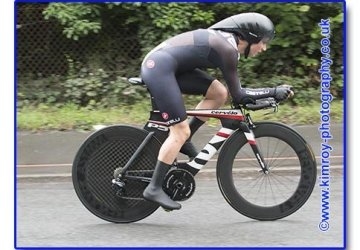 Turvey took ten seconds off Hayley Simmonds’ women’s record set two weeks ago, and was a convincing win on the day by three minutes.

“We had very good conditions with no wind, so it was ideal,” said Bialoblocki, 33 and from Somerset. “It was maybe a bit slow at the turn because it was a little bit damp, but otherwise perfect.

Newcastle-based Turvey, 36, will ride for Ireland at the European Championships in France next week.

She said: “I knew that ride was there, I’ve had a lot of bad luck recently with illness and misfortune, but I’ve known that on the right day I had a big ride in me.

“I had a chest infection so I was below par for the National 10 and 25 even though I got second, and I did a 19.27 on this course recent, but had a late start so it didn’t count.

“I only got to the course with 40 minutes to spare before my ride, because there was an accident and also I took a wrong turn and had to detour 20 miles! But it didn’t affect my performance.”

Six riders went under 18 minutes on a near perfect afternoon, which raised an estimated £2,000 for Erb’s Palsy charities, and organiser Simon Beldon said: “It was a superb day. There was very little wind, and what there was was in the right direction so most riders had a tailwind on the way back, which is the longer leg.

“We had a full field of 150 riders, plus reserves, and I had to send back a lot of entries too, so it was a really successful day.”