Carpenter, from Chichester in West Sussex, remains unbeaten in the VTTA national events this season adding the 10-mile event to her previous crowns over 15, 30 and 25 miles in the women’s event.

This time out the 52-year-old recorded a winning time of 21 minutes and 59 seconds to give her a handicap time of 18-30.

The O10/1 course sees riders head out and back along the A614 in Yorkshire from Hatfield Woodhouse before making the return journey.

Starting as last woman Carpenter was not to be denied another title to add to her collection in the women’s event.

Deb Hudson-Lumb (Nova Raiders) led the battle behind for second woman clocking a time of 23-26 which equated to a handicap time of 19-31.

A battle for third place saw Jo Corbett (Sherwood CC) finish third on handicap in 20-52 while Charly Heylar (VTTA West Group) was third on scratch with an actual time of 24-22.

In similar style to Carpenter the men’s event was dominated by Oakes recording the fastest time on scratch and handicap.

The 52-year-old, from Rutland in Leicestershire, also won the VTTA National 25 Mile Championships earlier this month and was in top spot again.

Oakes recorded a scratch time of 19-25 which was over a minute clear of his nearest rival and equated to a handicap time of 18-30.

Scratch rider Keith Ainsworth (Sheffrec CC) finished second on handicap with 19-22 with the 65-year-old clocking 21-22 which was sixth on scratch. 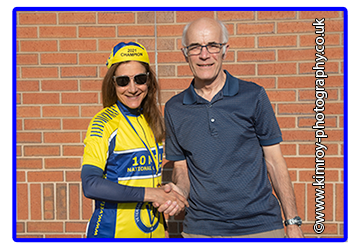 Meanwhile, 91-year-old finished third on handicap with his time equating to 20-01 once the handicap was applied.

Mark Wolstenholme (Swift Racing) was second male on scratch clocking 20-53 while nothing could separate Stuart Wells (Lindsey Roads Club) and Nicholas Cousins (Ilkstone Cycling Club) for third with both riders stopping the clock in 21-06. 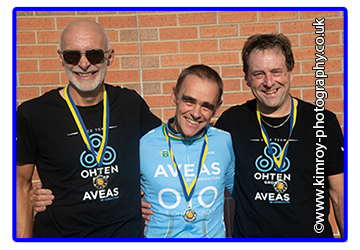