Comfortable win for Sinclair in Rowsley 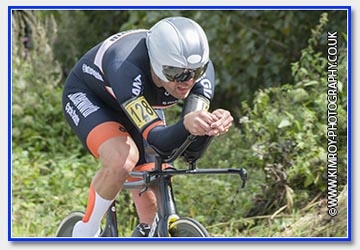 att Sinclair took victory in the Matlock CC 10 event on Sunday by over a minute from his nearest rival on the A10/16 near Rowsley, Derbyshire.

The 38-year-old from Leicester stopped the clock at 20.28 for a sizable victory ahead of the field of 29 finishers.

It is not the first time that the Lutterworth Cycle Centre RT man has been on the top of the podium this season, putting this victory with his successes at the Sleaford Wheelers and Coalville Wheelers events over the same distance.

Second place went to Patrick Gould of the host club Matlock CC, a time of 21.32 despite being a minute and 4 seconds off Sinclair was good enough for first veteran too,

Maxx RT team mates Ann Walsham and Emilie Verroken battled it out for the honours in the women’s competition for the second time this weekend.

On Saturday, Walsham claimed victory by 28 seconds in the 25-mile Birdwell Wheelers event in South Yorkshire, but heading south into Derbyshire it was Verroken who was on top over the shorter distance.

She posted a time of 25.05 on Sunday, 13 seconds quicker than counterpart to claim the fastest woman prize.

Isaac Russell (Derby Mercury RC) was the fastest juvenile rider in the field with a time of 26.40