Travis storms to victory in Ugley

Stuart Travis was the winner at the 25-mile Lea Valley CC event in Ugley, Essex on Sunday and he missed out on the amateur record by just seven seconds.

The Team Bottrill rider made it home in 51.49 on a day that stayed dry despite the forecast threatening a downpour.

Travis was a comfortable winner with second-placed Rob Walker of Cambridge University CC 2.10 behind in 53.59. 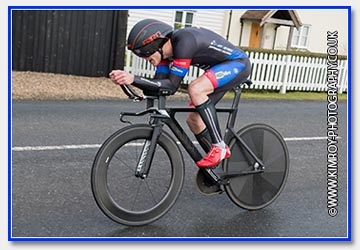 Junior rider Adam Robertson, riding for Verulam CC was taking part in his first ever time trial and he showed that he might be one to watch in the future, stopping the clock at 55 minutes dead to land third place on the podium.

Fourth-placed Geir Robinson was the fastest veteran on the day, the Regents Park Rouleurs rider setting a time of 55.07.

Mary Bower of Momentum Cycles was the fastest woman, getting the better of Susan Triplow (Essex Roads Club) and Kauren Kirchel (Chelmer CC) with a time of 1:02.54.