Fiona Burnie and Andrew Feather defied the cold conditions, storming their way to National Hill-Climb Championship glory for the first time in their careers.

Feather (BCR Racing), a former elite road racer, beat a top field including the past two winners of the highest honour in hill-climbing to snatch his maiden title with a course record performance on a cold and blustery day in South Yorkshire.

“I was really pleased, I initially thought the course would be a bit too short for me because I prefer the slightly longer climbs but obviously managed to get the win,” said Feather, who clocked 2:18.8.

“I had a game plan today that I wasn’t going to go off too hard up until the bridge - in the last 100 metres I was dying a slow death getting slower and slower but managed to keep going to the line.”

After winning 11 out of 14 hill climbs in the run-up to the event, Feather spoke of his preparations which included five consecutive wins, and added: “I think you’re testing yourself against a national field when you come up north.

“A lot of these climbs are iconic so they attract good fields. I wanted to see how I would fare against the other guys.”

The course in Stocksbridge hadn’t been the original venue for the championship, but Feather made the most of the day despite reservations about whether he would be suited to Pea Royd Lane, and added: “It’s a difficult climb to gauge because it’s not an all-out sprint.”

The pair set off out of the blocks next to each other with Burnie out first, posting a time of 3:05.8 before torrential rain hit the Sheffield area. Wilkinson couldn’t match Burnie’s time and had to settle for the silver medal. 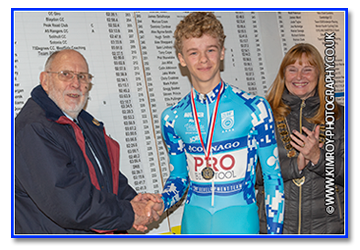 “I thought because I won three weeks ago I thought I had a chance of winning but obviously it all down to what you do on the day,” revealed Burnie. “Danny Grieves coached me and he helped me prepare perfectly, I wouldn’t have won it without him. And Ben Lane lent me his race wheels so yeah, without Danny helping me I wouldn’t have done it,” said Burnie.

Back in the men’s category, one of the favourites over shorter distances Calum Brown settled for second after posting a time of 2:20.5 – not far off his previous record that was smashed by Feather.

Kenway had the bad luck of setting off later in the day when conditions deteriorated and could only conjure up a third place after crossing the line in 2:21.6.

In the women’s section, the podium spots still to be filled were subsequently done so by Mary Wilkinson in second in 3:06.4 and Kate Mactear (University of Bristol CC), crossing the finish in 3:15.0. 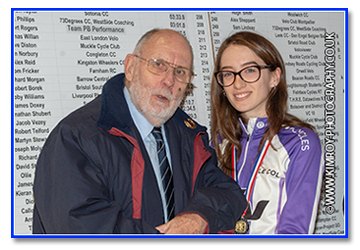 The junior categories were won by Alana Prior (Liv CC Halo Cycles) for the girls with a time of 3:36.0 whilst Joe Baker (Zero BC Development) was the fastest boy in 2:24.9.

The team prize went to Team B38-Underpin Racing for the third successive year for the men’s section who clocked a cumulative time of 7:12.6 whilst a time of 11:46.4 was enough to give Beeston CC the women’s team honours.

Glyndwr Griffiths (73 Degrees CC) was the quickest veteran on scratch, finishing in 2:31.2.

* All reports are copyright of Cycling Time Trials/Snowdon Sports. Not to be used without permission. This report by Jack Cudworth.