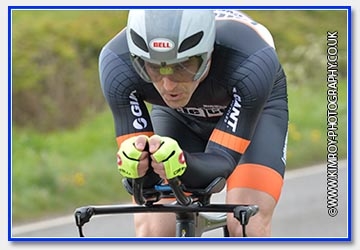 The 41-year-old veteran from Nuneaton took a great win of the season in the 10-mile event finishing in 20-25. Mead had a good 2017 season taking numerous wins across various distances and that good form has appeared to roll over into 2018.

David Kiernan (Team Jewson) has made it a consistent April with two second-place finishes so far this month after the podium at the Stratford CC 10 a week ago. A time of 20-30 wasn’t enough to take the victory but finished comfortably in second, 49 seconds ahead of third.

Keith Ainsworth (Sheffrec CC) was the final man on the podium – 21-19 was more than enough to complete the podium.

Liz Powell (Drag2Zero) took the prize in the women’s category for the second week running after victory in the Stratford CC 10-miler. Her overall standing of seventh trumped that of last week’s 22nd.

In a field packed with veterans, overall winner David Mead took the prize for the fastest time of the day. Only four of the 37 starters were non-veterans.

The event was fielded on the K48/10 course which sees the riders start just outside of Weston on the A51 and ride northwest to an island junction crossing with the A34 where they take the fourth exit and retrace the A51 where riders cross the finish just before Sandy Lane.