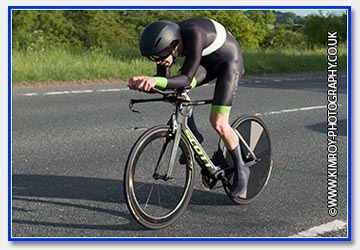 Rigby, 28, from Chorley, was pushed all the way by Stephen Irwin (North Lancs RC) but his time of 50.15 was enough for victory by just five seconds.

A westerly wind meant that riders enjoyed a tailwind on the outward leg from Cockermouth down the A66 on smoothly laid tarmac before turning at Keswick.

The return leg was more of a battle especially for those who had misjudged their effort with the last four miles including an uphill section into a headwind.

Veteran rider Irwin was again pushed into second by Rigby in a repeat of the same result as the Border City Wheelers 25 last month.

On this occasion Irwin cut the deficit to five seconds with a 50.20 while Richard Bickley (Border City Whls) finished third in 52.22.

"It was close between me and Stephen (Irwin) but I knew it would be because he is in good form.

"We have both been doing the overall district series and it was really close at one point but I have managed to beat him a few times marginally. He has beaten me a few times and I have had to look at everything to beat him including my training, my position and my diet.”

Archie Irving (Brecon Wheelers) put in another impressive performance to take the fastest juvenile prize with a time of 58.52.