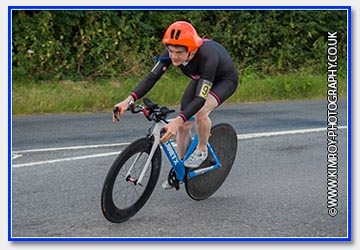 Matt Burden was victorious at the Western TTA 100­-mile event on Sunday, claiming victory by a sizable margin from the rest of the field.

The field undertook five circuits of the course in Wiltshire that takes in Malmesbury and Minety en-route, and it was Burden who was the clear winner amongst the field of 24 finishers.

Burden (73 Degrees CC), now in the veteran category, completed the gruelling 100 miles in hot conditions in just under four hours, the only rider to do so, with a time of 3:59.49.

This gave the 40-year-old from Bristol a winning margin of over 11 minutes from his nearest challenger.

In the women’s competition, Ruth Burrows of Mid Devon CC was the clear winner.

The 32-year-old from Bovey Tracey near Newton Abbot recorded a time of 4:36.46, which was good enough for 12th place finish in the overall standings as well as a 17-minute victory over nearest competitor Joanne Jago (Performance Cycles CC).