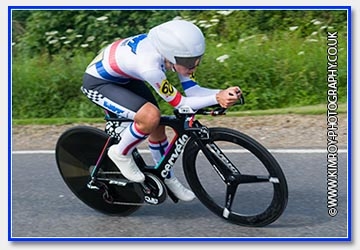 The event also counted as the final round of the Classic Series, although the title had already been wrapped up.  The women’s title was already won by the dominant Simmonds and she stamped her authority on the series by taking yet another win here after competing in Slovenia on Friday and driving back.

Simmonds said after the win: “It was a dry and sunny day but it was windy. The wind picked up more throughout the race too. There was a tailwind at the start and then a strong headwind on the main road section with cross winds cutting through all the time too.

“I was pleased with my ride, I was racing in Slovenia on Friday at 4pm so I did that, packed up and got in the car. My partner drove us to Munich and then on Saturday we drove to Milton Keynes and we got there at 9pm last night so that was a long journey.

“I had my recovery socks on and tried to keep my feet up in the car but racing on Friday and then being in the car all day wasn’t ideal before this event.

“I had a frustrating time in Slovenia really. It was a UCI 1.2 time trial and I finished fourth. But I was only seven seconds off the win despite having mechanical problems. I had to get off my bike and see to that so if I hadn’t had to contend with that I’m sure I would have won. 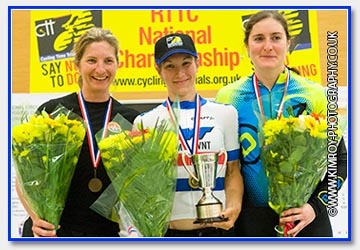 But it shows I’m in good form and I’ve got the British Nationals in a week and a half. That has a tough field and there are plenty of riders who’ll be competing but I’m feeling good and I’m going there quite confident.”

Drag2zero’s Alice Lethbridge, who came second to Julie Shaw last year, once again placed second with a ride of 47.33.

Liz Powell of Mike Vaughan Cycles won the veteran prize in a time of 49.06 and top junior girl was Lauren Dolan of Liv CC in 50.35.