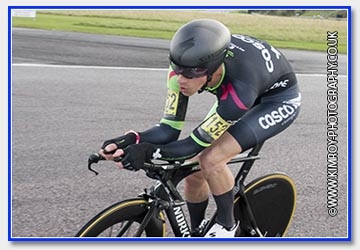 Veteran rider Simon McNamara secured the win on his local course at the Sussex CA 10 on Saturday morning.

The event was being raced on the A283, starting and ending in the village of Steyning on the edge of the South Downs National Park.

McNamara (South Downs Bikes/Casco Europe) lives less than five miles away from the course, and made good on his local knowledge claiming a narrow win in a highly competitive race.

The 42-year-old came top of the pile, stopping the clock at 20.31 in a race where the top three were separated by just eight seconds.

The result will be a boost to McNamara, who saw his 25-mile course record at the A3Crg 22.5 broken last month when he finished second.

Bettis made it his third second place finish in two weeks, following a brace over the Easter weekend at the Brighton Mitre CC 10 and 25 races, with Emsley also adding to his several podiums times in 2017.

McNamara and Bettis were joined by eighth place Kevin Plummer to claim the team prize for South Downs Bikes, the team having four riders place inside the top 10.

Ruth Summerford was fastest woman on the day of a field of 10 competitors, finishing 22 seconds ahead of Sarah Matthews (A3Crg).

Not only did her time of 23.06 give her the women’s prize, it was also good enough for a highly creditable 20th place overall of the 65 finishers on Saturday.

Jack Churchill was the first junior, he came 15th overall for Brighton Excelsior in 22 minutes 41 seconds.