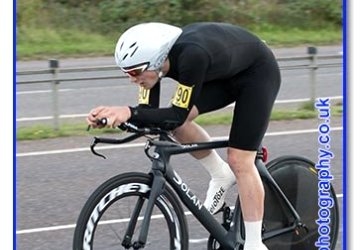 And multiple national champion Julia Shaw was victorious in the women’s event, the drag2zero rider covering the same course in 58.20 and winning by 55 seconds from Alice Lethbridge (Starley Racing), while Emma Lewis (Adalta CC) was two seconds further off the pace in third.

The event also doubled up as the final round of the RTTC Classic Time Trial Series, and the junior winner of round six – and the National Circuit Championship – was HMT Academy with JLT rider Sam Henning (pictured) who clocked 55-07 to win by 57 seconds from Cavan Walker (Acre RT), while Nathan Allatt (RNRMCA) was third, another 12 seconds back.

Top of the veterans on actual time was David Crawley (Velotik) whose time of 52.37 gave him fifth place overall, and he won that category by 26 seconds from Brett Harwood (Terry Wright Cycles), with Kevin Tye (VeloRefined Aerosmiths) third.

David Hargreaves of North Lancs Road Club was the best veteran on target time with a plus of 16.16, beating Kevin Tye by 14 seconds, and the top paracyclist was Nicholas Fairfield (City RC Hull) with an adjusted time of 56.24 to take the win by 11 seconds ahead of Matthew Robertson (Woolwich CC).