IN just her second season of hill climb competition Bithja Jones climbed to victory in the national championships.

The 41-year-old from Reading took victory by over two seconds on the 0.8-kilometre on the Streatley Hill climb, knocking 16 seconds off her course record set the previous year.

Jones wants to retain her crown next season on the iconic Winnats Pass in Derbyshire and feels there are more improvements to be had by targeting her training.

“It’s a bit longer and steeper than Streatley so that’s really good. As this is only my second hill climb season I feel I’m still very new to it and can improve quite a lot by doing more targeted training.

“I will start in the winter with long rides, strength training and get a good basic fitness. Then in the summer I will hopefully do track cycling again which is great for interval training and short efforts.

“Hopefully by the end of the summer next year I’ll be stronger than this year.”

Jones, riding for her local bike shop Pankhurst Cycles, felt she was an outside bet in the National Championships on the climb close to her home, despite holding the course record.

“This year I did get mentioned in the run-up to the event but I was an outside bet and people weren’t really reckoning with me,” added Jones.

“I guess if you’re the course record holder on the local climb people think that when the nationals come the strong riders will smash that record.

“I think they will know who I am next year. It will be very exciting and hopefully all the hill climbers who had to miss this year [due to travel restrictions] can come again next season.

“It was a bit strange this year, but I was just glad it went ahead. You do so much to be exactly in the right shape and fitness on that day so I would have been very disappointed if it hadn’t.”

A mother-of-two, Jones only started cycling when an injury prevented her running and led to her heading into the hills on her road bik 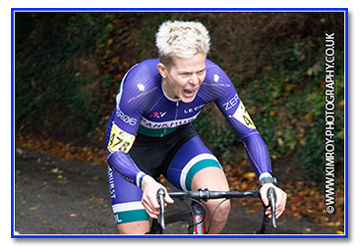 After buying a new bike from Pankhurst Cycles she was encouraged to join their cycling club eventually leading to competing.

In her maiden hill climb in 2019 Jones won on the Streatley Hill before being beaten into second in the Whiteleaf Hill Climb.

Jones had a disappointing start to the 2020 hill climb season when she finished third in the Cycle Club Basingstoke event behind winner Alice Lethbridge and Bexy Dew.

“My first hill climb in the beginning of September I was just really totally exhausted,” added Jones.

“I did come third behind Bexy Dew and Alice Lethbridge and we were all one and a half seconds apart.

“It was really hard work and I felt that it was not great and I should have done much better. But it was after lockdown and I had just started a new job which I had been in for only one week and I was just exhausted.

“Then it turned out during the course of the season I just got better and better. Maybe I just peaked at the right moment which was good.”

In her bid for national glory Jones was boosted by a lighter bike than her ride in the previous season thanks to a donation from a friend.

“Last year I had quite a nice bike which Pankhurst Cycles organised for me but it was still quite heavy and we knew I could easily get one that was at least one or one and a half kilogrammes lighter,” added Jones

“This year a friend of mine who sadly lost her husband, who was suffering from a lung disease, she decided to sponsor me because she thought I could win this race and I just needed a better bike.

“She got some money that she hadn’t reckoned with and so bought me this frame. I’m riding in memory of her late husband and the bike shop organised me some nice, light and stiff Falcrum wheels.

“That definitely helped a lot.”

* All reports and features are copyright of Cycling Time Trials/Snowdon Sports. Not to be used without permission. This feature by Ben Goddard.