Despite being relatively new to the sport Abi Smith (Moonglu CC) has continued to show her rising talent, picking up two national titles this season.

Smith spent eight years as a triathlete before moving her focus to cycling in 2018 and had immediate success in road racing. As well as riding on the track she spent the winter working on her time trialling position ahead of this season.

The work paid off and the 18-year-old from near York was crowned junior National 10 and Hill Climb Champion in a season curtailed by the pandemic.

“Last year I was rubbish at time trialling honestly, I was really bad,” said Smith. “I thought how am I good at endurance and bad at time trialling? So I got my position sorted out at the end of last season.

“From the beginning of 2020 I thought I was getting pretty good aerodynamically and getting the power out so I tried to enter as many time trials as possible to try and get selected for the World Championships.

“In the end it wasn’t a massive shame the World Championships didn’t happen as it meant I could do the National 10 and National 25 as my main goals for the season, they were my biggest races of the year.

“I’m so grateful to CTT for being able to keep their races on and do them safely. It meant that so many people could still enjoy riding their bikes in a race type of way without having to come into contact with anybody.”

After honing her time trial form during lockdown when competitive action returned at the start of August the youngster clocked a personal best of 21 minutes and 41 seconds in the Pendle Forest CC 10.

“The 10 is the one I’m most proud of as I worked really hard for that one,” added Smith.

“I was really worried that I wouldn’t do very well or get anywhere near where I was hoping too. In the end I was pretty happy with it.

“Had I been fully fit I could have gone a bit faster or got a bit more power. I just went as hard as I could. I really didn’t think I had done very well to be honest. I didn’t think I had won, I had no expectations at all and was really surprised at the end.”

A day after winning her 10-mile national crown Smith was back in action over the longer 25-mile distance winning the Drighlington BC 25 in another personal best of 54-43.

However, in the National 25, Smith had to settle for silver with her time of 56-41 six seconds slower than Maddie Leech (PH-MAS Cycling).

She added: “That was a painful one as afterwards you just think where could I have gained those six seconds?

“It could have been anywhere, on the roundabouts at the end, on one descent, six seconds is such a short amount of time it’s a painful one to lose. But at the same time Maddie did a brilliant job and a really good ride.” 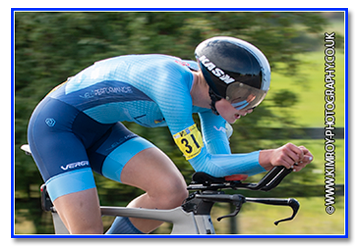 Smith considers herself as an ‘all arounder’ and her strengths as being able to hold sustainable power.

Despite not considering steep climbs as a strength Smith took her second national title of the season in the National Hill Climb Championships on the short and steep Streatley hill with a maximum gradient of 25.9%.

“That felt good,” added Smith. “It’s just power to weight on that one had it been any longer I don’t think I’d have lasted.

“I’m more endurance and when it gets really steep like that one I’d start to get dropped by the really tiny riders.

“Climbs at 5% is my good gradient where I can sit comfortably and put out a 20-minute personal best.

“The atmosphere of the hill climb - with no spectators, but with people standing at the bottom and the top – made it feel like a race.

“It’s one maximum effort, just go as hard as you can and then nearly throw up at the end. And then try and make it down the hill without crashing or falling off.”

Smith has joined the Great Britain Senior Academy Programme this winter with a focus on the road and track for the forthcoming season.

However, she says when her calendar allows she would like to return to the time trial scene to showcase her talent.

“I’m hoping to be able to ride some time trials again to both use them as events and practice for the international stuff,” she added. “So I’ll definitely try and stick some of the CTT events in to use them as race practice.”

* All reports are copyright of Cycling Time Trials/Snowdon Sports. Not to be used without permission. This report by Ben Goddard.